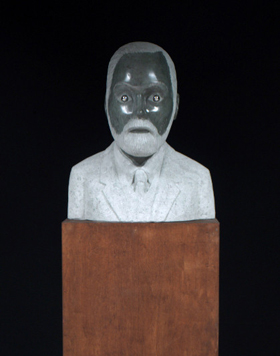 A Frozen Fountain (the family of pills)

Thomas Zipp is known for his complex spatial installations and laboratories, which he increasingly presents in connection with performances. And his installation “A Primer of Higher Space (The Family of Man revisited)”, recently realized at Kunsthalle Gießen, not only calls into question our society’s norms in an apocalyptic and at the same time everyday scenario, it also lets the visitors themselves slip into the role of performer and become part of this empirical research. Thomas Zipp retrospectively investigates art, science, and literature to link them with the present; what’s past is pushed into the present to reinterrogate human action on the basis of ostensible facts. Psychology and society are his central themes; existing value systems are constantly explored and re-explored by Thomas Zipp, opening up new ways of questioning the here and now.
A Professor of Painting at the Berlin University of the Arts, Thomas Zipp entirely avoids the art of painting—one of the pivotal means of expression in his oeuvre—in the aforementioned exhibition. Often, however, it is precisely his paintings that manage to decipher central thought processes and facts. In terms of composition, Zipp’s idiosyncratic handwriting serves as an important stylistic device. Letters arranged in a certain way point to the literature he consulted; he often quotes entire passages as part of the composition. The initials in the works’ titles refer to the person depicted, who often appears as a stand-alone portrait next to the painting. The paintings can be read as manuals for the underlying ideas. Humans are always at the center of his “analytical” paintings, which always also include motifs from the darker reaches of the unconscious. After the previous large-scale spatial installations at Galerie Rüdiger Schöttle, Hier (Futuristic Mess) (2007) and Aids To Theater Technique (2010), Thomas Zipp places his subtly conceived paintings and sculptures in his current exhibition “A Frozen Fountain (the family of pills)” in the focus of his social investigations. (IL)
Thomas Zipp studied under Thomas Bayrle at Städelschule in Frankfurt am Main and at the Slade School of Fine Art in London. He lives and works in Berlin and has been Professor of Painting and Multimedia at the Berlin University of the Arts since 2008. His works are represented in numerous public and private collections. Especially notable among his international exhibitions are MENS AGITAT MOLEM. Luther & The Family of Pills, Sammlung Goetz, Munich (2009), White Reformation Co-op Mens Sana in Corpore Sano, Kunsthalle Fridericianum, Kassel (2010), Comparative Investigation about the Disposition of the Width of a Circle, Palazzo Rossini (Biennale di Venezia), Venice (2013).