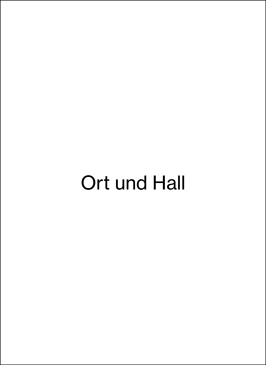 “But what really caught his attention was a tall, light-blue flower which moved him with its broad, shiny leaves. […] He saw nothing but the blue flower and observed it for a long time […].“ Novalis, Heinrich von Ofterdingen, 1802 (1)
In a magical blue, the proliferating branches of a tree stretch across the surface of a painting. Depicted in thick, monochromatic lines of color, as if applied directly from the tube, the vegetation separates from the surface, interrupting the two-dimensionality of the work. Consequently, the lush materiality of the tree creates tension in relation to the flat geometric forms and background shadows that are also present in the piece. In a different work there is the suggestion of an interior with an abstract table and bonsai; other paintings, however, give no clear evidence of whether it is a landscape, an interior, or a bonsai still life that can be seen.
Just as the bonsai imitates its natural archetype in miniature form, it can also be trained to grow in various directions and deviate from this archetype. It is in this way that Thomas Arnolds explores the central questions of painting, playing with principles of repetition and variation, reduction and redundancy, accumulation and concentration. Parts, either blurred or finely painted, contrast with other distinctive gestures. Materiality, surface, and structure are the leading parameters in Arnolds’s investigation of painterly processes. While he creates plasticity through impasto paint application, in his two-dimensional oil paintings, he negates central perspective and therefore spatial representation. At the same time Arnolds also always understands painting as a site of confrontation.
After exploring painterly concerns in his early years using the primary colors red, yellow, and blue, he eventually expanded his palette and experimented with these in monochromatic works. In his new work, alongside the non-colors black and white, Arnolds focuses on blue and its various hues. Aspects of the symbolism of colors interest him as much as metaphysical phenomena. As such, the image of the blue flower, as introduced by Novalis into Romantic literature, symbolizes the pursuit of eternity and the unattainable – ideas which the artist allows to resonate within his paintings. In other works, Arnolds’s architectural subjects come to the fore: using the motif of a column base, as it relates to the classical order of columns and its neoclassical references, he traces moments of inflection, bending, and stretching. One thing is certain: in his painterly exploration of nature, culture, and architecture, Arnolds creates his own blueprint.
Thomas Arnolds (born 1975 in Geilenkirchen, lives and works in Cologne) initially completed an apprenticeship as a mason and sculptor before studying under Walter Dahn at the Braunschweig University of Art. Apart from solo shows at the Kunstverein Reutlingen or currently at the Leopold-Hoesch Museum in Düren, works by Arnolds have been shown internationally, including in cities, such as Los Angeles, Beirut, and Dubai. His work can be found in prestigious collections, such as the Kunstmuseum Bonn, the Leopold-Hoesch Museum, Düren, and the Museum Boijmans van Beuningen in Rotterdam, where Arnolds has previously exhibited.