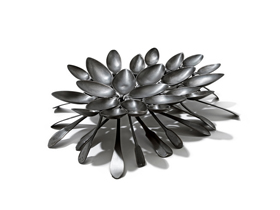 I often imagine an absolute absence of a thing. If I were to create a certain object for the very first time, what type of shape would I opt for?
The moment you decide to create something for everyday life, all the familiar objects in the surroundings start to appear strange. There are many formal elements, which could change the whole definition of an object, when slightly transformed. For example, I wonder, which formal characteristics distinguish a cup from a bowl. I often mull over the process; objects are constructed into a certain shape, then the shape becomes refined and improved until it is recognized as a quintessential form of that object. How does that process exactly go?