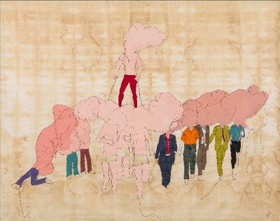 Gözde Ilkin / Cruise of Endless Confession
Where, at which time begins the place the voice cannot reach
Which past is to be erased for this place to cease to exist
The fear, which her heart thought of suspiciously, has eaten itself
I stutter, you tell the friendly noises well-disposed of the finger prints
Moments, which occur in dreams once they are lined up
For I would be cold going outside, if I had to plunge into the water once again.
The works shown in the exhibition attempt to communicate – through the language of images and the medium of video art – what happens to our memory, if it is systematically manipulated.
The sound video, which gave the exhibition its name, is screen onto fabric. It reveals a mental landscape, which cannot ever be reached. It is an essay on memory and loss.
The other works displayed here are: Darstellung dessen was man nicht sieht, Illusion, Flüstern, Winkel der Abweichung, and Falle [Representation of that which cannot be seen, Illusion, Whispering, Angle of Divergence, and Trap]. These works stand for the individual and the collective memory.
The video die unendlichen Tauchgeständnisse [infinite diving objects], which lasts 12 minutes and 15 seconds (link: https://vimeo.com/184913398), is the central work of the exhibition.
It is a space, in which time exists between the past and the future, yet remains fully constraint and entrapped. The figures, which are sewn directly onto the fabric, do not reach their full and final meaning until the video is projected onto it. It is this dialogue that gives back memory to the figures. The mental landscape is the space that stands for oblivion and loss.
Already the titles of the works are programmatic for the exhibition. In relation to this, the work Darstellung dessen was man nicht sieht can be highlighted. The work uses vegetable dye. Similar to the plant kingdom, where the co-existence of diverse plants is possible, here, too, a collective existence is depicted, which is enriched through the diversity of the individual.
Die Falle depicts flies and insects, which had been outsmarted by a plant. Here, however, with this juxtaposition, it remains unclear who trapped whom.
Art like an alphabet in order to give form to the quest for meaning, such is the everyday world of Gözde Ilkin, who lives in Istanbul.

Maximiliane Baumgartner / Sleepy tongue
The painting series sleepy tongue shows sketches of tokens in the form of painting tableaus.
The paintings create the framework for a school critical setting and refer to a discussion that interrogates the School as a recently forgotten place for institutional critique to emerge. They thus also consider themselves to be a commentary on the contemporary overarching demand for the School to be a time framed space, yet also a space that actively shapes experiences for children and teenagers.
The School is one of the first and most universal spaces in which certain roles are institutionally shaped and allocated. As part of public and private demands, it is today, more than ever, reliant on docile and teachable bodies. The designed sculptures evade direct participation and thus pose questions on the limitations of often hastily summoned participation structures in the contemporary educational system, in which art often becomes a substitute role.
Maximiliane Baumgartner work spans across the medium of painting as well as the fields of performance, pedagogy, and self-publishing. Through her interest in the public realm and its opposite, she develops (often in a collaborative manner) artistic interventions. Painting, for her, therefore becomes a field of social action. Since 2014, she has been working with the idea of pedagogic play settings; she is also researching its historical predecessors and searches for emancipatory possibilities for a critical and feminist pedagogy to emerge through the artistic process.