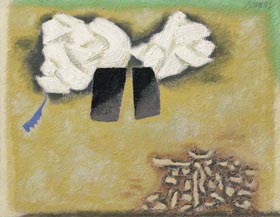 Willi Baumeister was part of an innovative generation of artists who happened to be born in the 1880s. Among them were Georges Braque, Fernand Léger, Pable Picasso, Ernst Ludwig Kirchner, Max Pechstein, and Oskar Schlemmer. Baumeister had a lively exchange with the avant-garde artists of his time and close friendships with some of them. In the era of National Socialism, during which Baumeister was banned from working and exhibiting, he lived a secluded life, working mainly on drawings. Around 1943, he wrote the infuential avant-garde text The Unknown in Art, which would not be published until 1947. This was the subject that Baumeister would explore all his life.

In direct cooperation with the Willi Baumeister Foundation in Stuttgart, responsible for the artist’s entire estate, regular exhibitions have taken place in our gallery spaces since 2001. The current selection for this exhibition covers the years 1928 to 1955 and has its own additional focal points. The motifs found in an earlier group of works from the 1920s and 1930s refect Baumeister’s friendship and intellectual afnity with Oskar Schlemmer and Otto Meyer-Amden. During their shared time as students they each investigated the simplifed human fgure, assembled from various parts in their own way.
A further group of works consists of drawings of sports people which eventually morph into free compositions with linear forms. They were made at the end of the 1930s and highlight Baumeister’s development from an emphasis on fguration to a focus on playful movements in open space. If movement had so far been rooted to one point, then this dynamic increasingly spread across the whole image: dispersal through small forms. To some extent, it becomes clear what Baumeister builds on – the human fgure, mechanics and kinetics – and where he turns: towards abstract painting. Through this connection, non-European, archaic, and prehistoric cultures fnd a place in his work: not as a quotation, not as a narrative representation of past or foreign worlds, old myths, or legends, but as an image of “the present state of civilisation”[1], as a symbiosis “behind whose facade the outlines of the past and lost cultures become visible” [2]. The tactile surface of the material becomes signifcant. Cultural connotations are to be found a priori within it: “The artist does not search within himself, but rather allows the unknown to appear through contact with the surface of the work.” [3] The group of works from the 1940s is comprehensive and draws from the theme of archaic, African and Chinese cultures, or references to Greek mythology, such as in Guardians of Hades and Giants. The late work of the 1950s, in contrast, consists of drawings with fantastical titles such as Phantom and Montaru. The artist developed an entirely unique visual language: a language that unites both memories of the collective world and his personal perception, embedded in the contemporary and the modern. [4]

Willi Baumeister (1889 – 1955 Stuttgart) is considered an important representative of abstract painting and a signifcant source of inspiration for various art movements after 1945. From 1927 to 1933 he taught at the Frankfurter Kunstgewerbeschule, later the Städelschule, and took part several times in the documenta (1955, 1959 and 1964) as well as in the Venice Biennale (1948 and 1952). His works have been exhibited internationally and can be found in important public and private collections around the world. Since 2005 the Baumeister Archive has resided in the Kunstmuseum Stuttgart. As a research center, it oversees the artist’s entire estate. [5]