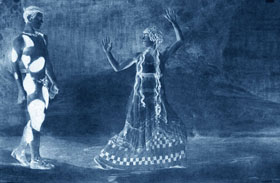 Thomas Ruff is renowned for his conceptual approach. In the late 1970s he helped shape the paradigm shift from documentary to art photography and continues to enrich the genre with new ideas: from the interior views of German living spaces of the 1950s and ’70s, the oversize portraits, to the photographs of buildings reduced to their core, followed by shots of the night sky, which marked the first time Ruff did not create work based on his own photographs. The subsequent series were also shaped by the investigation and inspiration of found photographic footage. Here, Ruff’s main concern was not the mere depiction of an interesting scene but rather the idea from which these images evolved. The Negative series has Thomas Ruff relying on nineteenth-century original photographs, scanning the originals, inverting the appealing subjects into their negatives, and transforming the typical sepia tones into cyan blue, thus expanding the former manual photochemical process with digital cyanotypes.
Computers operate nonstop in Thomas Ruff’s studio. Whereas the internet was still dissected for its visual structures in the Nudes, Substrat and JPEG series, the artist successfully designed digital photograms in a virtual darkroom using a 3-D program he developed specifically for this purpose. Objects such as spheres, glass containers, spirals, sticks, lenses, or crystals are generated in 3-D on the computer to then cover digital paper with them. The colored lights are placed and rendered together with the objects as an image, the objects’ positions, color gradient, light, and shading are altered. The results are digital photograms with a diverse, highly nuanced color gradient, an endless interplay of reflections and surface structures, and a high-definition light distribution that seems to extend infinitely in space.
For his most recent series, Thomas Ruff went to the photography archive of the Victoria and Albert Museum in London, where he discovered photographs by Linnaeus Tripe from the 1850s. Architectural and topographic images of monuments in India and Burma served Tripe as inspiration. Fascinated by the fragile material, Thomas Ruff has revived these heretofore unknown photographs in a sort of posthumous cooperation with Tripe.
His scholarly eye for the medium of photography and his analytic approach, which includes state-of-the-art technology, without fail lead to ever-new image creations. The exhibition Thomas Ruff “Series” offers insight into the diversity of his work groups and an overview of his most recent series. (IL)