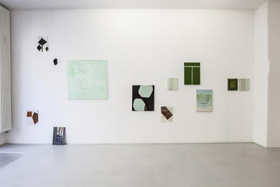 The word “reflection” describes the physical process of mirroring as well as the contemplation about a moment in time. In German as well as in British English two spellings are used: reflexion (“Reflexion”) and reflection (“Reflektion”). Contrarily to common use, German orthography only knows the spelling with an “X”. The differentiation between “Reflektion” for the use in the humanities and “Reflexion” for scientific fields is a pseudo-distinction which stands nonetheless in opposition to the two different spelling types in British English: “reflection” (scientific mirroring of objects and thinking) and “reflexion” (philosophical thought). With her title- choice for the exhibition of older and newer works Susanne Pittroff performs a gesture that is essential to her art-practice. She highlights a specific aspect in a system, in this case, within the system of synchronous German orthography, and stresses its boundaries and shortcomings.
The question of what an image can actually be and how it develops within an architectural space permeats Susanne Pittroff s entire artistic œuvre. Our exhibition reveals the variety of her practise with drawings, room installations, and minimalistic sculptures; it is a synchronous juxtaposition of diachronic works and combines well known with older, regained works. This exhibition is neither a retrospective nor a documentation of her many public art projects which nevertheless remain tangible in the background since they demonstrate the enormous scalability of her artistic approach. The exhibition “Reflexion” can be understood as a reflection on time and is driven, like most of Susanne Pittroff’s work, by the question of compositions within space.
Raimund Kühnel