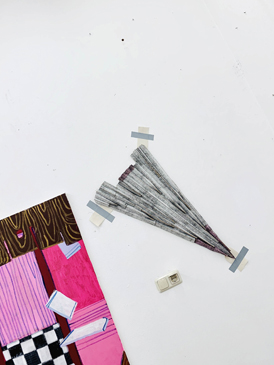 The exhibition “Athen – München” (Athens – Munich) will display and bring together works by three remarkable artists in the Galerie Françoise Heitsch this autumn, reflecting the gallery owner’s ongoing engagement in the Greek as well as the Munich art scene. Philipp Gufler and Antje Zeiher have each already had several solo exhibitions and are well-known to the gallery’s audience; the Greek film maker Eva Stefani, on the other hand, a Biennale- and Documenta participant as well as the winner of the Internationale Kurzfilmtage Oberhausen (International Short Film Days Oberhausen) will be exhibited for the first time in Munich.
Through the juxtaposition of such diverse artistic positions, (aesthetic) realms of experience are generated, which will initially unsettle the audience due to the works’ ambivalence. While “The Box” by Eva Stefani will move the onlookers closer to reality – closer to the loneliness of an elderly woman, who is in a permanent dialogue with her ‘box’, the television as her only conversational partner – Antje Zeiher’s images evoke ease and pure joy. They recall among other things music pieces, referred to as études or bagatelles, although they actually do constitute the main body of the works. Among the works are large-scale acrylic paintings, collages made out of cork, and paper planes, which evoke memories from school, but also the negative, which we today might associate with flight shame and drone war fare. Her works play with abstraction, since her compositions reveal every day objects, such as envelopes. It is, as if there was a conceptual short circuit, where the material itself becomes the object, the objects then form the structure, creating an abstract structure, which eventually defines the abstract through the material. In that respect, art historical relations are revealed; for example, with the paintings of the Neue Sicht (“De Nieuwe Visie”) of the 1970s. Yet, unlike this movement, there will be no assertions of having discovered a new perspective (and seen from an art historical perspective, the new is often proven to be wrong anyway). In this respect, Zeiher’s paintings reveal their beauty by remaining serious and yet playful at one and the same time.
If we follow the paper planes, we will eventually land at the video “The Box” (2004) by Eva Stefani in the basement section of the gallery. We see an elderly woman that interacts and communicates with her television. As witnesses to such an emotional and touching scene, which we often see in Stefani’s work, where both fiction and realism is are located equally, we learn about aspects of every day Athens life, which usually remain hidden. Just as in many of her video works, Stefani succeeds in capturing people and stories without have to restore to pathos in her images.
As the third position, we see as a continuation of his last solo exhibition at the Galerie Françoise Heitsch, the screen print works on mirrors by Philipp Gufler in a new juxtaposition. Initially, they appear to us as declinations of the abstract and the formal, yet, within, they reveal a certain symbolism and different art historical reference points. Furthermore, the matt mirrors reveal the very aspect that will shatter our conception of abstraction lastingly. We always see ourselves, and just as Narcissus, we often do not realise that it is us or we that are depicted by the work itself. The works are complemented by research in diary format including images and texts on long, vertical fabric strips, which recall trips to Portugal and Upper Bavaria, thoughts on Ludwig II, Hubert Fichte, intimate encounters, and queer history. As a whole it appears like the search for a narrative without authority and fixed identity. This is also why we find the following lines: “My records are records of mistakes, fallacies, and rash actions”. The self is conceived as ever changing, and thus at every gain of knowledge and every cementation of certainty, we must still assume the possibility of the opposite.
Raimund Kühnel