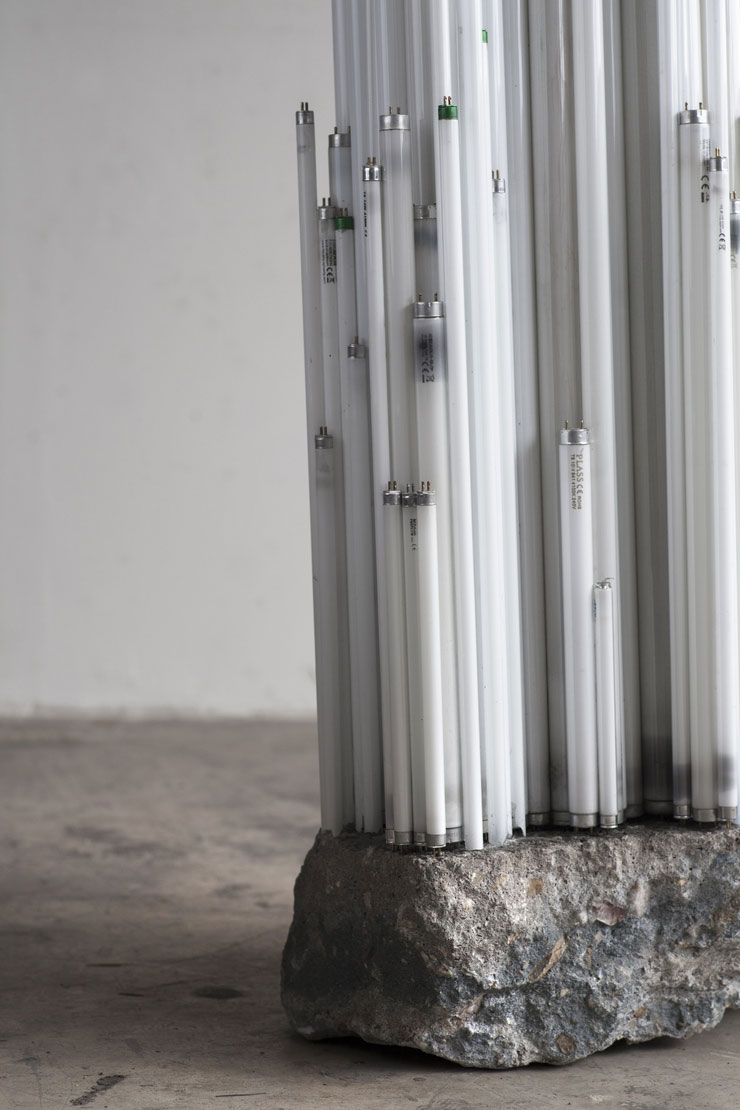 Gedankenexperiment shows new works by Kintera that has not been shown in Germany before. The exhibition includes multiple sculptural tube lighting towers from his Memorial of Passed Light series and a selection of 3D ‘drawings’ produced through the use of electrical
charge. At the centre of the show is an immersive installation recreating the artist’s studio, giving visitors a glimpse of Kintera’s artistic process.
By altering everyday objects and scavenged electrical waste materials, Kintera’s works invite visitors to consider alternative perspectives on contemporary life. The result is a balance between dystopian criticism and humoristic social commentary, which explores themes of memory, absence and the future. Kintera’s fascination with kinetic art through electricity and
light is visible throughout.
The exhibition is designed as two contrasting halves that take the visitor from the external skins of the artworks into what has shaped their deeper cores. By playing with the tensions between agency and chance, Kintera explores the relationship between natural, technological and artistic forces that inspire the artistic process of creation. The exhibition offers discursive perspectives on the role of the artist and what it means to create.
Krištof Kintera (born 1973, Prague) is a major name among Czech artists working today and is celebrated for a style that uses seemingly trivial humour to challenge serious issues of hypercapitalist systems and the ecological concerns that they create. His work has been exhibited throughout the world, including in La Galleria Nazionale in Rome, the National Museum of Modern Art in Tokyo, Museum Tinguely in Basel, Haus der Kunst in Munich and in galleries and museums in New York, Sydney, Prague and Berlin. Kintera was also chosen to provide a major public art installation for the new Dvorecký bridge in Prague, which started construction this summer.
The exhibition is curated by Stella Toonen, who works with Tate Modern and King’s College London as a PhD researcher. She has recently been appointed as director of World on our Doorstep, a new community arts programme in East London.
Gedankenexperiment is supported by the Czech Centre in Munich.