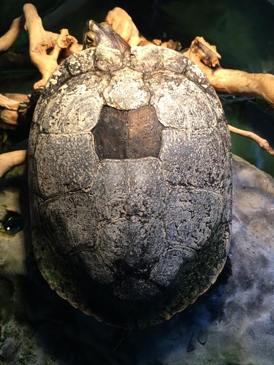 PHOTO FINISH : A Rabbit Too Fast To See
The story of the tortoise and the hare traditionally has the hare succumbing to overconfidence, stopping to take a nap by the stream, while the tortoise plods on to victory. I imagined a different version of this story, one in which the hare is moving faster and faster to the point of invisibility; it’s speed is such that it can no longer be perceived at all. The tortoise on the other hand has slowed to a full stop; it is dead. This story is a political allegory of the present.

Cutrone’s Solution
Its true that a turtle shell
without a turtle
is like a skull,
and so
it can seem weighted
like a metaphor for death.

But a turtle shell
is also a shell
and so its lightness
extends from the emptiness
of every metaphor.

But there is still another problem:
A shell is exposed
and a skull is concealed beneath the skin
If a skull were a shell
It’s image could not be a portrait
of everyone who ever lived.