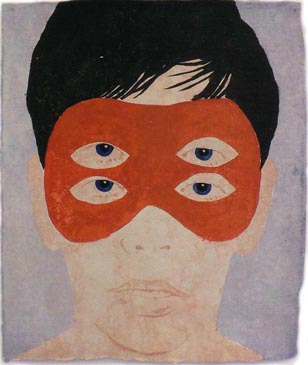 Galerie Wittenbrink is pleased to present the third solo exhibition by James Rielly.

1956 born in Wrexham (Wales) Rielly falls into a prominent group of postmodernist artists heavily influenced by Dada and Surrealism, dubbed the “Young British Artists,” (a group that includes Damien Hirst, The Chapman Brothers or Chris Ofili) who first appeared on the art scene in the 1980’s.
Rielly is known for his absurd portraits of unknown people without names or histories. The pale, muted palette of his work stands at odds with his dark, often morbid themes of youth, aging, alienation and abnormality. Rielly’s grotesque subjects are playfully sinister, bizzare, funny and painfull at the same time. His sideshow freak type characters serve as acompassionate testimony for the peculiar.
KNOCK ON WOOD is a collection of both large and small scale acrylic on canvas paintings, works on paper and an animated video installation.
The exhibition will be available for viewing until September 17.

About the artist:
James Rielly received his art education at the Cheltenham College of Arts and later at the Belfast College of Art.
He is the 1995 winner of the John Moores Contemporary Painting Prize, the United Kingdom’s best known painting competition.
Rielly works and resides in France, where he is also the professor of painting at the École Nationale Supérieuredes Beaux Arts in Paris.