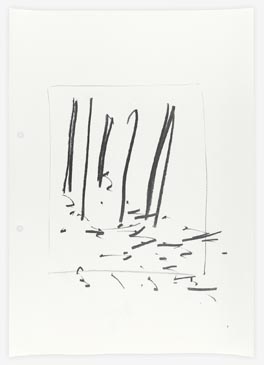 Imi Knoebel’s Tafelbilder (panel paintings) achieve their maximum efect through focused positioning and minimalist reduction. In addition to a diversity of colors, from gold leaf through to bright orange or dark blue, materiality and the application of paint contribute in particular to the complexity of these monochrome works. The viewer’s gaze is almost completely absorbed by the changing brush marks on the shiny aluminum surface. Material, color, and form create a tense contrast. Although the panels are classed as individual pieces, they should also be considered in relation to the other works. Knoebel, who devised the installation concept for his exhibition at Jahn und Jahn, stated: “When I do an exhibition, I simply try to create a new work from the pieces that I already have or that I bring together.”[1] At the center of this process is the act of seeing itself; the artist creates a space for experiences that enables new perspectives.

Although the term ‘Tafelbilder’, which has been taken as the exhibition title, may appear relatively classical, Knoebel’s artistic approach could hardly be more progressive. For more than fve decades this former student of Beuys has been dealing with the subject of painting, its function, and meaning. How can a traditional ‘Tafelbild’ be interpreted in a contemporary way and thus expand the idea of painting? Knoebel was greatly inspired by the theories of Kazimir Malevich and his infuential Black Square (1915), which marked the “frst non-representational expression of perception” [2] in painting and therefore a new starting point. Grounded in abstract art, Knoebel has created series of works that explore questions of design, surface, and the structure of space, but also the relationship between work and viewer. Photography and light have been taken into consideration to the same extent as material images, found objects, or installations. In the mid-1970s, Knoebel introduced color to his practice, exemplifed by pieces like 24 Farben für Blinky – 24 Colors for Blinky (1977). Since then, he has demonstrated a keen awareness of color in terms of its nuances, variation, and rhythm. Characteristic of Knoebel’s works are references to earlier pieces, their development, and reimagining. New paintings are permanently being produced.

Imi Knoebel (born 1940 in Dessau, lives and works in Dusseldorf) studied in Joseph Beuys’s class at the Kunstakademie Düsseldorf from 1964 – as did Rainer Giese, with whom he adopted the common name ‘Imi’ (meaning: Ich mit ihm – I with him). In 1972, the Stedelijk Museum in Amsterdam dedicated a solo exhibition to him. Following this, he took part in the documenta 5-8 (1972-1987) and had solo shows in important museums and institutions, among them the Kunstsammlung Nordrein-Westfallen; K21, Dusseldorf; Kunstmuseum Wolfsburg, Wolfsburg; Neue Nationalgalerie and Deutsche Guggenheim, Berlin; Dia:Beacon, New York; Kestner Gesellschaft, Hanover; Haus der Kunst, Munich; and Kunstmuseum Bonn, Bonn. In 2018, the Museum Haus Konstruktiv, Zurich, presented a large solo exhibition of his work. Fred Jahn has been working with the artist since 1971, at that time for Galerie Heiner Friedrich, and has shown his work numerous times.