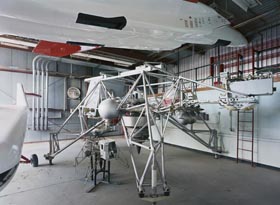 The final exhibition in the gallery’s fiftieth-anniversary year, bringing together various works of artists it represents, is dedicated to the still life. Unmoving or inanimate objects have been the subject of art since the genesis of painting, long before nature morte was elevated to its own painterly discipline in the seventeenth century. But how does the still life fare today in contemporary art? Is transience still a significant issue?
Helene Appel applies paint directly to the untreated canvas, whose coarse structure serves as the organized backdrop of her still lifes. Grains of rice, slabs of meat, refuse, or other everyday things are brought to the canvas in a trompe l’oeil style. The objects conjure a virtually haptic effect, which in turn is transformed into abstraction due to the objects’ arrangement and the interplay of the canvas’s linear texture.
As a photographer, Candida Höfer’s name is closely associated with the portrayal of deserted interiors whose aura has a hypnotic effect on the viewer. Her lesser-known still lifes, however, use a narrative and poetic language to document situations from everyday life, which in these works transforms into seemingly methodically composed color photographs.
Karin Kneffel is a virtuosic painter of realistic scenes. Her works conflate meticulous research with the imaginary. She investigates her subjects layer by layer, all while being just as interested in the stages of change as in playing with the effects of painting, the textures, the colors, and the illusionistic appearance. Veristic attention to detail in her still lifes lets us look at the day-to-day as if we beheld it for the first time.
Thomas Struth’s Rotfuchs from his series of dead animals shows us a fox that died of natural causes and, like the other animals in this series, was examined professionally for its species’ protection. Still and dignified, the cadaver lies before us as if it had just taken its last breath. The beauty of nature, paired with its finitude, here has become a haunting memento mori.
Jeff Wall directs the viewer’s gaze into the window of a flower shop without flowers. Empty vases and flowerpots sit behind the window; only a tulle-like flower construction and brittle twigs point to its function. Two cartons, one reading, “18 candelite cardette,” hint at their possible contents: material needed for flower arrangements. One isn’t quite sure if this is a staged or an everyday and therefore random situation. The viewers invariably start analyzing details and developing their own story.
Along with numerous other works, this exhibition marks the first time that photograms by the artists Susan Weil and Thu-Van Tran are shown. They offer a sneak peek of the gallery’s program next year. But first, visitors are invited to linger and find tranquility in pondering the question mentioned at the beginning, and to discover the diversity of the contemporary still life. (IL)