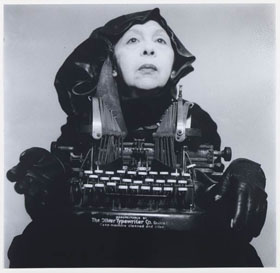 The works of female artists have had a special status in the Sammlung Goetz since its establishment. Collections of important individual positions – like those of Rosemarie Trockel or of groups such as the Young British Artists – were built up early and expanded over the years with new acquisitions. In her passion for collecting, Ingvild Goetz was guided by her interest in socio-political and formal-aesthetic issues, as well as artistic materials; additionally, she always remained open to new discoveries. On the occasion of its 25th anniversary, the Sammlung Goetz is presenting a three-part exhibition in its own museum and in Haus der Kunst. The show is dedicated to the artistic creations of female artists and their works here are placed in a generational dialogue.

The third part of the exhibition leads back to artists such as Geta Brătescu, who was born in Romania in 1926 and passed away this year, and the French-American sculptor Louise Bourgeois (1911–2010). In their work, both women provided fundamental impulses for exploring and dealing with issues of identity, gender and their own biographies, thus influencing the subsequent generation. As early as the 1960s, Geta Brătescu developed a performative approach, which she pursued in her films, photographs and drawings. Louise Bourgeois expanded the classic materials of sculpture with more commonplace materials, such as fabric, latex, tapestries and garments. In juxtaposition with selected works by Young British Artists and other artistic positions, it becomes apparent that their works have lost nothing of their relevance to this day.
Curated by Ingvild Goetz and Karsten Löckemann