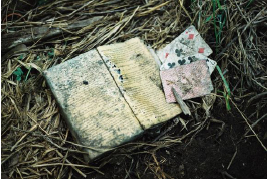 I am not sea, I am not land

Since 2011, every six months different media works from the Sammlung Goetz have been presented in curated group exhibitions in the former air raid shelter of Haus der Kunst. For the first time since the establishment of the cooperation, a solo exhibition is on view in this space: Cyrill Lachauer. I Am Not Sea, I Am Not Land. The Sammlung Goetz, which contains extensive groups of works by Cyrill Lachauer, commissioned the artist to develop a new installation for this unusual location.
The result is the extensive multimedia installation Cockaigne – I Am Not Sea, I Am Not Land (2018-2020); it consists of films, videos, slide projections, sound installations, photographs and wall texts. In the work, the artist explores the idea of land in its most varied forms. Land, for example, can signify home and thus provide roots, or it may provide nourishment. It can, however, foster a sense of inclusion or exclusion when it embodies the idea of nationhood. The title Cockaigne refers to the 1567 painting by Pieter Bruegel the Elder, The Land of Cockaigne, a mythical land of plenty. It symbolizes a utopian-ironic alternative to the everyday harshness of rural life.
The point of departure for the project was the film Dodging Raindrops – A Separate Reality (2017), which is the only pre-existing work presented in the exhibition. The artist, who was born in Rosenheim in 1979 and lives in Berlin, studied directing, ethnology and art. In his youth, he came across the book A Separate Reality by Carlos Castaneda. Motivated by the idea of a narrative landscape, in which the history of its inhabitants is also inscribed, Lachauer traveled to the United States. Starting in Los Angeles he followed the route of fictional field research of Carlos Castaneda. It remains to be seen how much of his own history Lachauer, who critically questions his role as a white European man, artist and traveler, has incorporated in the film.
A cooperation with Haus der Kunst

Cyrill Lachauer
Cockaigne; I am not land, I am not sea, 2020
(Filmstill: Justin), ©️ the artist
Courtesy Sammlung Goetz, Medienkunst, München