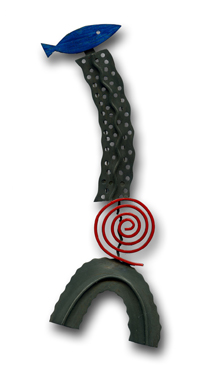 A journey with Ramon Puig Cuyàs, Georg Dobler, Jürgen Eickhoff, Herman Hermsen, Winfried Krüger, Ruudt Peters and Graziano Visintin through the history of jewellery of the past 45 years.

The show features seven jewellery designers, each progressively older and active for several decades, who have significantly influenced international jewellery circles. They are all artists associated with the Galerie Spektrum, which was founded in 1981 by Marianne Schliwinski and Jürgen Eickhoff, and which today still plays an important role in the jewellery scene.

With their work, these artists have clearly shifted the symbiosis of art and manual crafts into a more art- oriented direction. Bauhaus and Constructivist tendencies are distinguishable, Pop Art periodically shines through, and some pieces look like tiny architectural structures. With this generation of artists, jewellery has been imbued with more content than ever before.

On display are a few older works and a comprehensive overview of current works. In addition, photos show those pieces that the artists themselves consider important in their own development.
CHRONOS looks both back and forward, but above all it focuses on a moment.
Christoph Blase