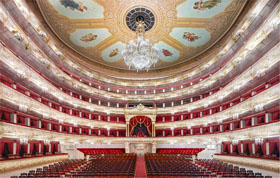 For more than five decades, Candida Höfer has been making a name for herself internationally as an artist working in photography. Her works linger in the viewers’ memory: Images of magnificent Baroque theaters, light-drenched museums devoid of human beings, or the manifold structures of libraries from various historic periods exert their effect in their negotiation of light, order, detail, and color. Her works are created during various travels and follow either the artist’s own explorations or invitations she receives. In 2017, Candida Höfer visited Moscow, which yielded new works that are now shown to the public for the first time in the exhibition In Moskau –В Mоскве at Galerie Rüdiger Schöttle. These works bear Candida Höfer’s famous signature in giving lasting, detailed insights into Moscow’s architecture. The work Bolshoi Teatr Moskwa II 2017, for instance, captivates us with its clearly defined structures and also with the warmth exuded by the lighting and colors. The linear-perspective shot, the absence of people in the frame, and the chosen angle invite us to enter the picture, take a seat, and become part of the stunning architecture. Like so often in Höfer’s images, human absence also permits us to look at what these spaces are supposed to mean for people and the way in which these spaces produce their effect. Thus the image not only becomes a projection surface for the beholder but also references the intentions of the spaces’ creators as well as the uses given these spaces throughout their history. Candida Höfer studied photography under Bernd Becher in Düsseldorf from 1976 to 1982. Since the mid-1970s, her photographic works have been displayed in numerous solo exhibitions and in the most important museums of Europe and the United States.