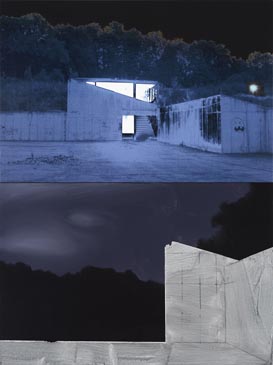 “Vanitas” the double picture of an empty house.
From the empty rooms to the empty bunker.

Pictures, that become darker, is quite frequent now in the new works of BEN WILLIKENS and this includes his interpretation of Melancholie, so to speak the end of the building spot of reason, on which the work rests but not the spirit.
Ben Willikens installed bright flood lights in the building and developed his work according to the photos he took.