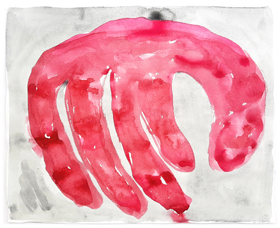 claudia shneider was born in 1961 in south africa and grew up as a privileged white in apartheid johannesburg. she studied jewellery art in stellenbosch, then in munich under hermann jünger, but chose aquarelle as her medium of choice before moving on to painting and sculpture. her first exhibition with the gallery rupert walser in 2000 was entitled „on paper”. shneider is a co-curator of the joburgfringe, which she initiated in 2009; created as a satellite event to the annual joburg art fair – south africa’s prime art fair –, the joburg fringe is now recognized as an important showcase of contemporary art in south africa.
shneider’s aquarelles and paintings are often haunted by the burning issues of the day – in africa and europe (she being at home in both), race and gender relations, exploitation, migration, water, animal conservation; they also tackle womanhood, artist’s choices… while her work is mostly figurative, it is by no means “realistic”. rather it is keenly “nail on the head” with brazen, wicked yet feather-light humour, and executed with an enchantingly easy, yet virtuoso stroke. hence the sense of delight in pure painting itself.
but for all the explosive nature of her work, there are also light, life-loving themes, almost banally simple, poetic ones such as grandma, anthill fountains or simply flowers in small format.
conversely her sculptures can sometimes be monumental. such is the piece entitled “living and dying in africa” that has already been realised in three different locations in europe and africa. like many of her sculptures, this elephant-size work is made with stuffed global shoppers, that is cheap, “poor” materials that carry an inherent meaning in the tradition of the objet trouvé. similarly the wonderful “concrete water” was made with used plastic water bottles recycled as moulds and her “box” sculptures consisted of discarded consumer packaging.
for this exhibition shneider has made a larger-than-life hand that hangs menacingly over the goings on. large hands were already a feature of her major exhibition in the neue galerie dachau 2009, but those were not rapacious hands. instead: two hands lightly cupped one upon the other as if carrying something with great care, protectingly with the title “soul boat.” here the hand from above is not a helping hand, but one that grabs, and though its size is imposing the fragile nature of its structure shows this grabbing hand – greed, corruption, violence… – as doomed.
the title of this exhibition, „howzit – help yourself”, illustrates claudia shneider’s love of words – english and africaans, german, bavarian… – with which she plays freely. for her language is a huge material trove of sounds and meanings. thus words and titles play a key role in her work.
in english „help yourself“ generally means “serve yourself! take!”. when translated literally into german “ help yourself “ implies “… otherwise no-one will help you”, or even holds the promise of salvation: „… then god will help you“.
“howzit” – a contraction of “how is it?” – is pure joburg speak and is often used to say „ciao, servus, hey…“, in the same way as „how are you?“ can be used as greeting.
here “howzit” is taken literally and claudia shneider shows us a bit how it is.